Also known as a pentest, Domain performs penetration tests, purposeful software attacks on a computer system with the intent of uncovering a network’s security weaknesses.  How easily can data be extracted from the computer system?

The first step of Domain’s penetration testing process is identifying the target systems and defining the goal of the testing.  The next step is to achieve the predefined goal by reviewing the available information and taking the necessary actions, such as performing an attack on the system.  By doing so, Domain can determine if a system is vulnerable to cyber-attacks by assessing its performance 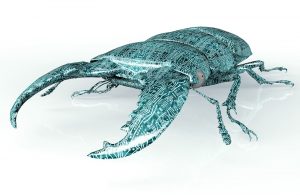 during the strenuous and purposeful attack.  In other words, pentests put significant pressure on a network’s defenses to see if they can be broken down.  On the other side of the coin, the test can prove the security measures to be
sufficient.

After a penetration test is performed, Domain creates a high-level report of the test results and presents it to the owner and/or executive(s) of the firm.  The report includes suggestions on how to mitigate the risks uncovered during the test.  A more detailed report can also be provided to the firm’s IT department.

Some common goals of penetration testing are to: identify crucial system vulnerabilities; uncover vulnerabilities that may be hard to see from the surface; determine the effect an attack would have on business operations; test the strength of the network’s defense mechanisms; and determine appropriate security measures to eliminate the uncovered vulnerabilities.

“SenseIT allowed us to test shipments of our valuable chemicals for temperature excursions while they traveled through one of the hottest areas of the world, the Mojave desert. With SenseIT, we were able to confirm that our packaging was sufficient to protect our heat-sensitive product under the most extreme conditions. SenseIT took the guesswork out of it.”

"By deploying the SAP Business One application, the organization realized new efficiencies, improved data accuracy, and increased system availability. From a cost-benefit perspective, SAP Business One was clearly an excellent decision.”

"When it came to replacing our ERP system, Domain was our first choice. Domain is currently implementing SAP Business One to support both of our existing companies."

“SenseIT provides visibility into shipments of StyleCraft’s fine cabinetry which we never had before. We now know how the product is treated during loading, transit, potential warehousing prior to delivery to the homeowner, and installation."

"As a custom manufacturer, we have a complex pricing structure. Domain designed and implemented a pricing system that met all of our requirements, and continually makes improvements to the system."

"While working on our EDI implementation, Domain went above and beyond the traditional EDI documents to implementing remittance advices, allowing our customers to make payments directly to our bank."

"We rely on Domain to configure our HANA servers and SAP applications for our development and demonstration system. Domain implements it all-- the operating system level, whether Windows or Linux; the database level be it HANA or SQL; and then the application level, SAP Business One or SAP ECC. Domain is reliable and knowledgeable in these complex implementations.  If there is an issue and they do not have immediate answers, they find the solution by tapping their resource networks, which include SAP and Microsoft.  They understand the urgency and criticality of systems and have never let us down. I recommend Domain for the hard stuff!"

“SenseIT was key in our success of obtaining data and metrics to verify cold chain requirements for our pharmaceutical shipment in the transit with our carriers. SenseIT flexibility with design and customization of reports, data gathering and sensor options was exceptional. Their service and responsiveness was  fantastic!”

"The Domain organization was proficient both in evaluating our controls within the NIST framework and executing the assessment in a professional and thorough manner. Given our experience with Domain and their extensive knowledge of the NIST framework, we can vouch that the firm is well qualified to perform a cybersecurity audit for any organization."

"[I] can’t say enough about the job Larry did and how valuable he proved in a very difficult situation [involving a cyber security breach]. After all was said and done, I said to myself the best thing that came of our E&Y Event was employing your firm's services so as to have available a resource like Larry to help us through a very difficult situation. Please pass on to the powers to be at the Domain Group again the great job Larry did in going above and beyond in dropping everything on a moment’s notice."